I’ve had an LDAP setup for a quite a while1, but I’ve never really used it. Sure, I could set up my Dokuwiki to get the logins and groups from LDAP and that’s kind of what it’s for, but that wasn’t enough. I wanted to use LDAP as a central configuration/setup/inventory management system. Configure my mail server to lookup email addresses there, assign port numbers and hosts for my services from there, etc.

And then I failed at the first hurdle. My LDAP setup didn’t come with a schema for all the mail attributes I wanted. Sure the mail attribute was there, but I also wanted to specify mailenable to be able to turn mail access on/off. Also aliases and mailing lists. So I went looking for how to extend the schema of an LDAP server and boy did it take a lot of research2. I actually abandoned it for a while and only picked it up again by chance the other day.

Here’s how I did it

I managed to find a schema file with the exact attributes I was looking for in the osixia/docker-openldap github repo. However, you can’t simply add the schema file to the server. It must be converted to ldif format first. There are plenty of blog posts online that explain how to do this, but I wanted something that just does it for me.

Which I found right here. It’s a script that will take a schema file and then spit out the relevant ldif for you. Properly formatted and everything. I had to modify the script a little bit to take the name of the schema file from the command line, but it was as simple as changing

The major downside was that I needed to do this inside the LDAP docker container. So a quick docker exec -i -t ldap /bin/bash and I was in. I curled the script, modified it and ran the schema file through it3. Then I tried to modify the schema by calling ldapmodify.

Once that was all done, I quick out of the docker container, restarted it and and hey presto, I can now add lots of mail related attributes. 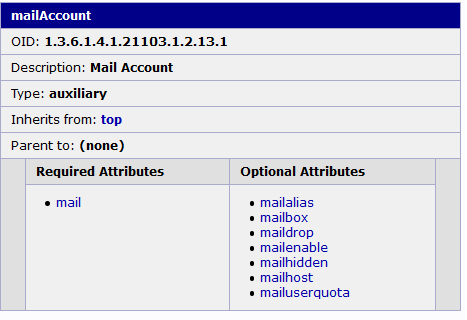